Home - About Us - Principal Teacher 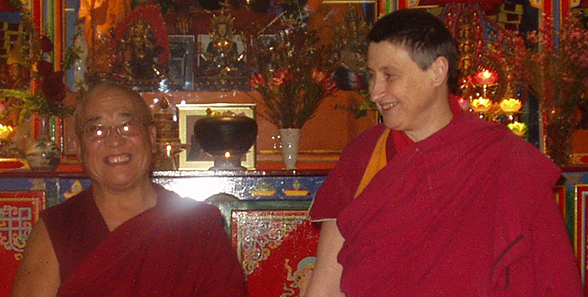 Founder of the Overcoming Problems System

Gen Chris has been studying Tibetan Buddhism since 1980. Her teacher, His Eminence Khejok Tulku Rinpoche founded the centre and is Spiritual Director. Unfortunately, Rinpoche passed away in 2013.

Gen Chris has been with Rinpoche from the first day he arrived in Australia in 1987 and is his first non-Tibetan student. She first received teachings from H.H. Kalkha Rinpoche in 1998 in India and in 2007 he came to Australia and taught  in the centre.  Professor (Geshe) Khensur Rinpoche taught in the centre in 1996 and 2004.

In 1992, H.E. Khejok Rinpoche placed Gen Chris in a unique position, asking her to teach and manage a Traditional Tibetan Medical Institute.

In 1993, he prophesied that Gen Chris Ngawang Yangchen Roberts would be teaching people how to overcome problems.  In 1993 she incorporated yoga into her classes and by 1998 her classes had evolved into the Overcoming Problems system.

Gen Chris was heavily exposed in the 70’s to the deadly herbicide 245T (Agent Orange), which contains a toxic dioxin.

In Traditional Tibetan Medicine there is a prophecy about environmental degradation and mental health issues causing illness.

As the result of these two factors Gen Chris is interested in environmental problems and mental health issues and their causes. Therefore some of the courses examine the cause of environmental, social and cultural issues and how they create problems in everyday life.

Working in the community

Gen Chris has served as a minister of religion on the NSW Cancer Council’s Ethics Committee and was the Buddhist representative on the Women’s Interfaith Network for which she was a founding committee member.

She also ran Overcoming Problems programs for two years in the Ashfield Uniting Church, where Rev. Bill Crews runs the Exodus Foundation that works with disadvantaged and marginalised people.

Gen Chris Yangchen (Roberts) speaking at the ‘Mind and Its Potential Conference’.

Gen Chris has made presentations at conferences, both international and in Australia. She has taught within a diverse range of  organisations, including universities, hospitals and community groups to doctors, nurses, social workers, rehabilitation specialists, counsellors, and the physically and mentally ill. She has also taught many groups from all the major schools of Buddhism, and within other religious and philosophical organisations.